Posted by Sunlight Sunshine on Friday, July 15, 2011 Under: Cyprus cats
Imagen a big peace of land, with a few trees and a lot of dirt. It was impossible to walk there. A few days ago they begun to clean the land, to make parking. Two big tractor and one big car worked there . Before yesterday in the morning I listened a kitty to cry. I run outside to the tractor. It was not working, just stand there and the crying came from there. I looked in it, under it, nothing. I did not see a kitty. I went to the other side of the tractor, nothing. The crying stopped, I could not find a kitty. I wanted to go inside, when I listened again. I looked around and I found a very little kitty on the ground. Her nose, eyes, ear, mouth and hair were full with sand. I run to was her, to help her to breath and I put her in Moro's box. But before I took this photo. 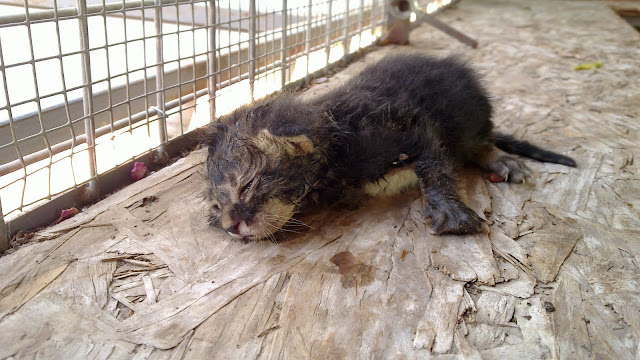 And just after this I begun to think. Can you imagine? Two big tractor and one big van worked there where this little kitty were. How she survived? Who guard her?
I try to feed her, but she did not want to eat. I knew I have to find her mother. I can not take more one little kitty, Moro is more than enough. And I just hopped the mother took her back. In the afternoon I listened a little kitty to cry. It was a short time, she cried like when the mother went back to them. I told to my husband I had to check it, so I begun to walk. From us about fifty meter I found the mother cat. She had a same kitty like I had. I run for my kitty, and took to the mother. She was angry I went to near, but she took the kitty. I made a photo of them and left them alone. 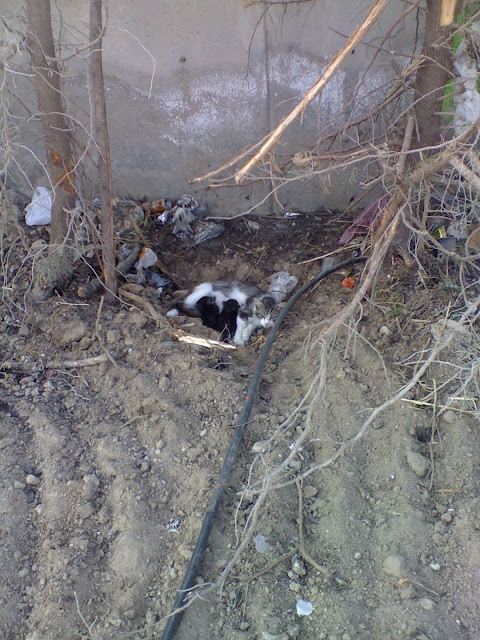 I thought the story finished her. Do you think, too, do not you? But it is not finish so read more please.

Yesterday in the morning one of the tractor was cleaning the last part of the land, when I listened a kitty to cry. I run there, the man in the tractor looked at me, on his face "what she wants here", I waved to him to stop everything what he was doing. He had no other choice, he had to stop, I was already opposite the tractor in the dirt, looked for the kitty. I found the same kitty, who I found before yesterday, there in the dirt, again full with sand, hanging on a wood peace. I knew if she is here, the other one had to be there. The mother moved them there. Thank god I found the other kitty, too. She was already buried, but the top of the head was out. I quickly took her, too, waved to the tractor he could continue the work and I run to clean the kitties. My husband took this photo. 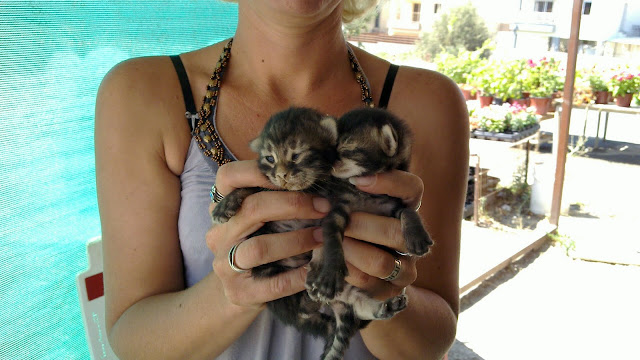 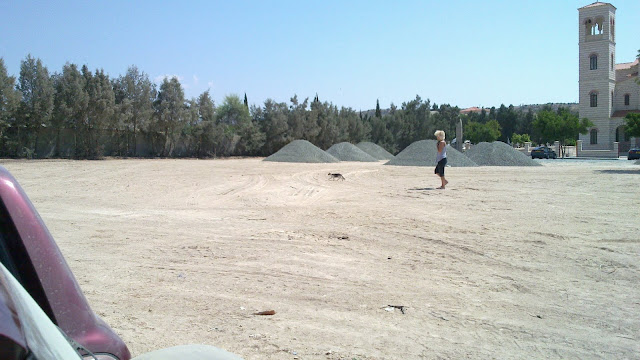 I put there the kitties where she showed me, I waited till she took one of them to the other side of the fence and I left. After little time I checked them, to be sure she took both of the kitties.